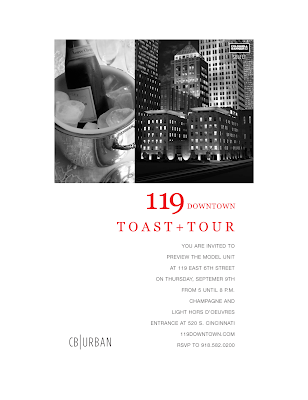 The newest place to live in downtown Tulsa, 119 Downtown, is having an open house and tour of the model apartment unit on Thursday, September 9th from 5-8pm. River City Development is the team behind 119 Downtown; River City Development is also responsible for the conversion of the Philtower to apartments. The McIntosh Group is the architectural firm doing the renovation while Pohlenz Cucine Moderne is designing all the kitchens. One thing that differentiates this project from other recent residential developments downtown is that the 119 units are for sale, not rent. Click here for some great images and renderings of the project.

Located on the northwest corner of 6th and Cincinnati, Leon B. Senter designed the building in 1949. Originally constructed as the Stanolind Building, it has also been referred to as AMOCO East, the 502 Building, the Towercade, and most commonly the Service Pipeline Building. In addition to the 119 Building, Senter also designed many other prominent Tulsa buildings, such as the Fire Alarm Building, the Philcade, the downtown YMCA, and Will Rogers High School. Although not as flamboyantly art deco as some of Senter’s early work in Tulsa (like the fire Alarm Building and Philcade), the 119 Building is an excellent example of late deco in Tulsa that also includes many mid-century modern details.
The tour on Thursday, September 9 from 5-8pm is free and open to the public. For more information and to RSVP, call 918.582.0200.
(Please note that this is not a TFA event.)
©2023 Tulsa Foundation for Architecture