Tulsa Foundation for Architecture champions the art of good design and celebrates Oklahoma’s architectural heritage through education, advocacy and archives.

We are Tulsa’s voice for architecture and design.

Without Herb Fritz, AIA, TFA would not be here today.

TFA will always be grateful to the late George R. Kravis II for his enduring inspiration and support.

The People Who Make It Happen 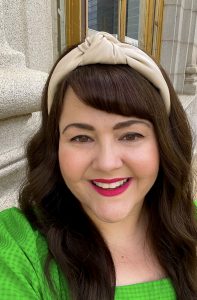 Amber Litwack, PhD joins the Tulsa Foundation for Architecture from ahha Tulsa (formerly the Arts & Humanities Council of Tulsa), where she most recently served as Director of Education and Exhibitions. As part of ahha’s Executive Leadership Team, she developed and oversaw key organizational initiatives, including THE EXPERIENCE, a large-scale immersive exhibition, THE STUDIO, a fine arts focused maker space, and Any Given Child-Tulsa, a national partnership among the John F. Kennedy Center in D.C., The City of Tulsa, Tulsa Public Schools, and 14 Tulsa arts and cultural institutions. Litwack brings to this role over 20 years of experience in the nonprofit sector and has extensive experience in program development and evaluation, community partnerships, fundraising, strategic planning, and public presentation. Additionally,  Litwack serves as an Adjunct Professor in The Graduate School of Museum Studies at The University of Tulsa.

Litwack is an active member of the Tulsa community. She has served on a variety of nonprofit boards and committees and has held various volunteer jobs. Recently she served on the Downtown Coordinating Council’s Community Engagement Committee, where she helped to bring the largest augmented reality mural in the world to downtown Tulsa. At the state level, Litwack served on the Oklahoma Arts and Education Task Force and has acted as a grant review panelist for The Oklahoma Arts Council for the past six years.

Litwack has been recognized extensively for her work. Highlights include being named as a “Woman of Distinction” by Tulsa Business and Legal News, being named a “Change Maker” by the Charles and Lynn Schusterman Family Foundation, and being recognized by Oklahoma Magazine as a “Top 40 Under 40” young professional in Oklahoma. Additionally, two Programs directed by Litwack have won Oklahoma Governor’s Arts Awards.

Litwack holds a BFA in Graphic Design and a BA in Art History from The University of Tulsa, a MA in Arts Education from The University of Tulsa and a PhD in Educational Leadership from Oklahoma State University. In 2015, she completed a Project Zero Fellowship at The Harvard Graduate School of Education. A lifelong learner, Litwack recently completed Oklahoma Center for Community Justice’s Inclusive Leadership Institute, and Nonprofit Management Certification through the Oklahoma Center for Nonprofits.

Litwack proudly resides in an historic home in Tulsa’s oldest neighborhood, Owen Park, with her husband, Zach, an Emmy Award winning filmmaker, and her rescue French Bulldog, Lola. In her free time, Litwack enjoys traveling, creating art in a variety of mediums, reading, and searching vintage stores for one-of-a-kind treasures from decades past. 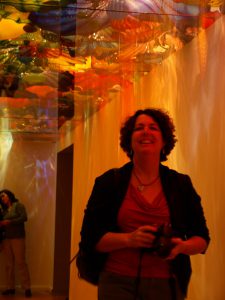 Ellen Stanley moved from volunteer to Tours Coordinator in early 2020.  Her interest in architecture and Tulsa’s history grew as she first took tours, then led them, then began to write them.

Never afraid of public speaking, Ellen has spent the last few decades teaching art, science, and outdoor education programs.  She has organized learning opportunities and entertainment for young and old.  Always curious herself, facilitating continuous learning for others was an easy passion.

When not at work, Ellen is renovating a stone house on a small mountain in Tahlequah, hiking trails around the state, kayaking on lakes and rivers or playing one of her many ukuleles on the screened porch while watching the plentiful wildlife share her acreage. 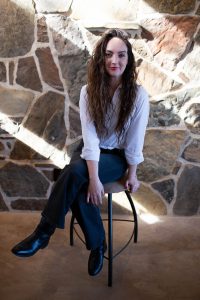 With a background in events, fine art, film, and music, Lindsey Neal Kuykendall joined the staff of TFA full-time in January 2023 as the organization’s Curator of Public Engagement. Lindsey began serving TFA as an Independent Contractor in 2022 to help manage TFA’s programs and events and is thrilled to expand her work for TFA as a full-time employee.

Having over fifteen years experience, including most recently leading the Events department at Philbrook Museum of Art in Tulsa, Oklahoma, her work can be seen in Vogue, Martha Stewart Weddings, Tulsa People Magazine and more.

As co-founder of Wild Mountain Studios, an artist retreat style recording studio in Osage County, her breadth of offerings range from high end event design to film and music production and curating exhibitions.

As a writer and investigative journalist, she found her community voice with a special focus on Tulsa’s music history.

In her free time, she enjoys playing the violin and oil painting. 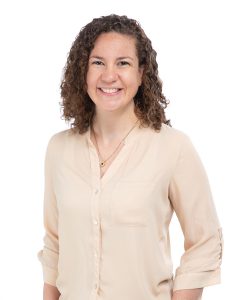 Malinda Blank is a Tulsa native who has devoted fifteen years to the nonprofit, arts management, and museum worlds. She earned her Masters of Fine Art from California State University, Chico and her BA in Fine Art from the University of Southern California.

After returning to Tulsa, she held the position of Chief Registrar for Gilcrease Museum where she oversaw the collection including acquisitions, loans, and inventory management. She curated the exhibit “Silver and Graphite: Selections from the Gilcrease Photography Collection” and oversaw the acquisition of the substantial Charles M. Russell (Britzman) Collection. She also worked as an Account Specialist at the Tulsa Area United Way and as the Business Manager for FireThief Productions.

From a young age, Malinda has been passionate about serving her community.Malinda was selected for and completed the Emerging Leaders Society Philanthropy Forum and NeXtulsa programs and dedicates her time to serving on numerous Boards of Directors for local nonprofits. Currently, she is the Secretary of Kendall Whittier Main Street, the PR committee Chair of the Booker T. Washington High School Distinguished Hall of Fame and Co-Chair of the Tulsa Area United Way Community Investment Panel.

Malinda’s love for working with collections led her to TFA. She relishes being deep in the archives, surrounded by documents, photographs, and blueprints. She enjoys a well-organized spreadsheet, 1970s game shows, and a lively round of dominos.

As a practicing artist, Malinda’s work focuses on textiles and heritage art through her business Blank Canvas Craft.

Tulsa Foundation for Architecture was created in the 1990s to change the way Tulsa sees itself and treats its built environment.

It was at a time when downtown Tulsa was being abandoned, historic buildings leveled for parking, street improvements failed the pedestrian, zoning codes favored the automobile and there was a lack of overall vision.

Tulsa’s success with the federal Urban Renewal program in the second half of the 20th century far outpaced many of its competitors. Tulsa forever altered the architectural landscape of downtown, as wide swaths of smaller-scale buildings dating to the turn of the 20th century fell to the wrecking ball to make way for new development. In Tulsa’s case, Urban Renewal left a legacy of significant midcentury structures in its wake, such as the Yamasaki-designed Williams Tower – so whether one considers Urban Renewal a raging success or a disaster is a matter of perspective.

Urban Renewal was designed to bring people back downtown in an era of rapid suburbanization. Shoppers abandoned the city center for the mall, and new highways cut downtowns off from residential neighborhoods. This period also gave rise to a rash of demolitions by downtown property owners for surface parking lots. Highways rammed through close-in historic neighborhoods. By the late 1980s, much of Tulsa’s beautiful urban fabric had become a sea of asphalt. Something had to change.

In 1995, a group of architects and preservationists formed a new nonprofit to provide a credible voice and expertise in the area of historic preservation. Tulsa Foundation for Architecture was born out of AIA Eastern Oklahoma, the local chapter of the American Institute of Architects. AIA needed a repository for collections of original architectural drawings. The community needed a nonprofit organization to provide expertise and leadership in historic preservation, urban design and to educate the community about Tulsa’s diverse architecture.

Our first ambitious effort was to deliver city design conferences that were patterned after the “Mayors Institute on City Design” (MICD). In partnership with Tulsa’s Mayor, an MICD alumni, AIA Eastern Oklahoma and Tulsa Foundation for Architecture created dynamic day-long events in order to bring our Mayor’s national experience home. In the following years we observed transformative change from the almost two thousand attendees. Participants included city managers, city planners, key staffers representing streets and parks, architects, realtors, real estate owners, neighborhood representatives, educators and the press. These events, held over a period of several years, proved to be highly influential and led to a new vision in our community – a vision where design matters.

Today, TFA continues to build on its original mission to serve as a resource that recognizes, records and preserves the built environment, and advocates quality future development that enhances Tulsa’s livability. Creating a culture that embraces the value of our architectural history is central to TFA’s purpose. Please sign up for our email list to stay in the know about our events and tours.

TFA believes that architecture is not only one of the fine arts, but that it is the most complex and vital art form to mankind. Our buildings are cultural mirrors; they reflect the technology, social trends, economic history, value systems and aesthetic movements of the time of their creation in a manner that other art forms rarely evoke. To preserve historic buildings from every period is a way of traveling back in time, allowing us a glimpse into the mind of people who lived hundreds of years ago. We can learn tremendous amounts about other art forms, technology and ways of life by looking at the smallest of details: nails, bricks, locks, hinges, lighting and plumbing fixtures and on and on. And, like the other great art forms, the best buildings display exemplary craftsmanship. One of TFA’s greatest passions is to share the history and artistic progression of Tulsa’s diverse architecture with our community through tours and other programming.

Tulsa Foundation for Architecture recognizes that ability, culture, ethnicity, gender, opinion, race, religion, sexual orientation, and other aspects of diversity have a profound impact on shaping individuals and communities. We are actively committed to creating inclusive spaces and programming.